The 2001 CKCU Ottawa Folk Festival, held August 24 to 26 at Britannia Park, had a stellar lineup of performers. American folk hero John Prine thrilled the capacity audience with a two-hour concert. Canadian folk icons Kate and Anna McGarrigle were awarded the Helen Verger Award, while up-and-comer Evalyn Parry was presented with the first annual Beth Ferguson Award. CBC broadcaster and storyteller Stuart McLean was on hand throughout the weekend, including a session where he read letters from overseas CUSO volunteers.

Festival organizers were over the moon. “It was our most successful festival ever,” commented Festival DirectorGene Swimmer. “Seeing the crowd waiting for John Prine was awesome. I couldn’t help thinking about a rainySunday morning eight years ago when I was pretty sure nobody would show up, and there would never be asecond Ottawa Folk Festival.”

Co-founder and Artistic Director Chris White said the 2001 Ottawa Folk Festival was the most elaborate one ever presented in terms of the number of performers, the number of stages, the diversity of the program, and thenumber of attendees. “In spite of this unprecedented scope, the festival was also the smoothest one ever,” said White. “I love the way all aspects of the festival have evolved over the years, and the way the audience embracesthe variety of programming we present.”

During the 2001 festival, we also paid tribute to Ottawa Folklore Centre co-founder Terry Penner and blues musician Larry “The Bird” Mootham, who both passed away since the last festival. The festival’s choir was renamed The Terry Penner Weekend Choir, and a one-hour tribute session to Larry called The Bird Still Flies, was held on Sunday. 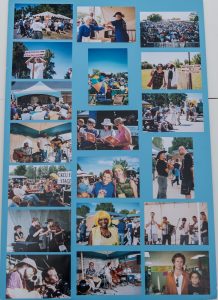 Friday evening opened with the thundering rhythms of Japanese traditional drumming group, Oto-Wa Taiko, followed by Ottawa Folklore Centre owner Arthur McGregor performing an acoustic guitar version of our national anthem. Raggamuffin, a lively reggae fusion band, next took the stage. The audience was then treated to a reunion of the folk band Pied Pumkin, whose members include Rick Scott, Shari Ulrich and Joe Mock.The group’s last Ottawa festival performance was at the Festival for the Folks in 1976.

Following the intermission, festival goers warmly applauded a captivating performance by Jesse Winchester, a popular American-born musician and songwriter who has lived in Canada since the sixties. The Wyrd Sistersperformed with their usual aplomb, their set running the gamut of styles from jazz to folk. Controversial Cape Breton fiddler Ashley MacIsaac caused a sensation when he launched into a whirlwind-paced set accompanied by John Allan Cameron on guitar. Hard pressed to keep up with MacIsaac’s frenetic fiddling, Camerondisplayed characteristic Maritime humour when he opened a song with the comment “Now I’m going to do a song Ashley has never heard.” The evening ended with a set of hard-driving story songs by Fred Eaglesmith, to the delight of the many Fredheads in the crowd. His six-piece band included both Willie P. Bennett andWashboard Hank.

This year, the festival added a new daytime stage located in the food court area. In all, there were eight daytime stages, which started at 11:00 a.m. and ran all afternoon. Festival goers had to make sometimes difficult choices of which session to attend in a given time period. Fortunately, because of the informal nature of the festival, it was possible to move between the stages during daytime sessions.

Artistic Director Chris White was happy to see so many people arrive at the festival early in the day to enjoy the myriad opportunities for participation, as well as the performances. “There is a definite element of magic in thespirit of community that exists in that beautiful park by the river, and in the activities that take place there duringthe day,” White commented.

On the Nortel Networks Stage, Saturday morning opened with a special live broadcast of the longest-running folk show on community radio in Canada: CKCU-FM’s Canadian Spaces. The session was hosted by Chopper McKinnon, with guests Joe Bishop & Kendall Sullivan, Roy Forbes, Selina Martin and Terry Tufts. Ron Moores hosted the second half of the broadcast, billed as CKCU-FM Back 40, with guests David Francey,Jenny and Dan Whiteley, Michele & John Law and Willie P. Bennett. The next session, CBC Radio’sBandwidth Live, was hosted by Bill Stunt and showcased the talents of Don Ross, Ember Swift and The Cash Brothers. Shari Ulrich hosted the session Shari and Her Boyfriends, with Rick Scott, Joe Mock, Roy Forbes and Jesse Winchester.

The Rogers Stage, located around the corner from the Phase 2 Stage, opened with a double bill featuring the Ottawa bands Siobhan and Satellite. A tribute to the popular Quebec club, The Black Sheep Inn, was hosted by Paul Symes and featured Darlene, Fred Eaglesmith, Susan Werner and Jim Bryson. The East Coast Kitchen Party was a spirited musical celebration. It featured host Greg T. Brown, Ashley MacIsaac, Siobhan,and surprise guest Pierre Schryer, who was rushed in from the airport just in time to join in the fun. Spirit Wind hosted the Harmony session with The Cash Brothers and The Wyrd Sisters. Jesse Winchester earned a standing ovation at the finale of the Beyond Borders session with Michele & John Law and host David Francey. The daytime entertainment ended with the eclectic Anne Lindsay Band. 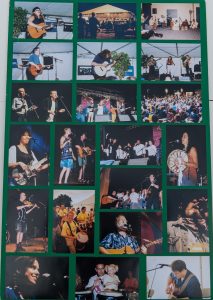 The OFC Music Stage, sponsored by the Ottawa Folklore Centre, offered a splendid afternoon of participatory sessions. The first session, Sacred Harp Singing with Shelley Posen, introduced the audience to this American style of singing. Wendy Moore hosted an Introduction to Stepdancing, Willie P. Bennett led the Harmonica Workshop, and Arthur McGregor presented the Rise Up Singing singalong. There was also a rehearsal of the Terry Penner Weekend Choir and a Musical Mentor Showcase featuring Terry Tufts and teachers and students of the Ottawa Folklore Centre Canadian Musical Mentor program.

The featured concerts on the Nortel Networks Stage began on Saturday afternoon with concerts featuring the jazzy alternative music of Ember Swift and the country-tinged rock from The Cash Brothers. The vibrant group Women Ah Run Tings exploded onstage in bursts of colour and sound, with their heady mixture of reggae, hip-hop, R&B and funk/rock. Gypsy-flamenco guitarist Juan José Carranza performed with his six- piece band. Bluegrass was the predominant theme of an evocative set by the Jenny Whiteley Band.

The first Beth Ferguson Award, honouring the late singer-songwriter, was presented to Evalyn Parry for her ability to convey human experiences with relevance, intensity and wit through her music. Singer-songwriter Beth Ferguson, who died in 1999, was widely admired for the beauty and clarity of her songs, and for her commitment to communicating honestly about women’s experiences.

Passionate singer-songwriter Stephen Fearing was in fine form during his set, wowing the audience with his inimitable guitar playing and intense lyrics. The zany francophone duo Polly-Esther captivated the audience with their folk-rock music.

After sunset, John Prine came onstage to a wildly cheering sold-out crowd, many of whom were thrilled to see the American folk music legend for the first time. With his excellent band, Prine maintained the excitement for two hours, playing hit after hit, recent tunes, a four-song encore, and a duet with Jesse Winchester. The eveningdidn’t end there for some of John Prine’s fans. About a dozen of them stayed on long after the concert ended, singing his songs under the stars.

The Bird Still Flies was a moving musical tribute to the life of the late blues musician Larry “The Bird”Mootham. Hosted by Vince Halfhide, this session featured Larry’s former student Southside Steve, The Mighty Popo and Johnny Russell. 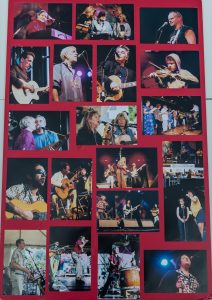 The OFC Music Stage down by the water opened with a Terry Penner Weekend Choir Rehearsal led byAndy Rush. Andy Daub presented the session Tin Whistle for Beginners. The Gospel Sing session was hosted by Anna Williams. Duncan Gillis demonstrated during the Bodhran for Beginners session. The CelticRathskallions Kid’s Show was up next, followed by a second Terry Penner Weekend Choir Rehearsal.Tracy Vilbert’s session, Learn to Belly Dance, wound down the day’s entertainment.

As the song goes, some days the rain must fall. And Saturday evening, the rain came down in torrents, which shut down the main stage for two hours. Undaunted, many of the festival goers crowded into Lakeside Gardens, returning when the entertainment resumed on the Nortel Networks Stage. While indoors, the audience was treated to a magical performance from the Terry Penner Weekend Choir, whose enthusiasm had not been dampened by the rainstorm.

The entertainment on the Nortel Networks Stage opened with Joséphine. CBC Radio’s Stuart McLean was up next, followed by singer-songwriter Susan Werner. Celso Machado and Qiu Xia He performed an exotic set combining music played on the guitar and the pipa, a traditional Chinese instrument. Kate & Anna McGarrigle performed and were also presented with the Helen Verger Award for their valuable contributions to Canadian folk music. Since releasing their first album in 1976, the sisters have won two Juno Awards and attained international renown for their delicate harmonies, sensitive lyrics and rootsy North American sound. The festival wrapped up with the set from fiddling sensation Pierre Schryer.

The festival held a series of benefit concerts at a variety of venues in Ottawa.