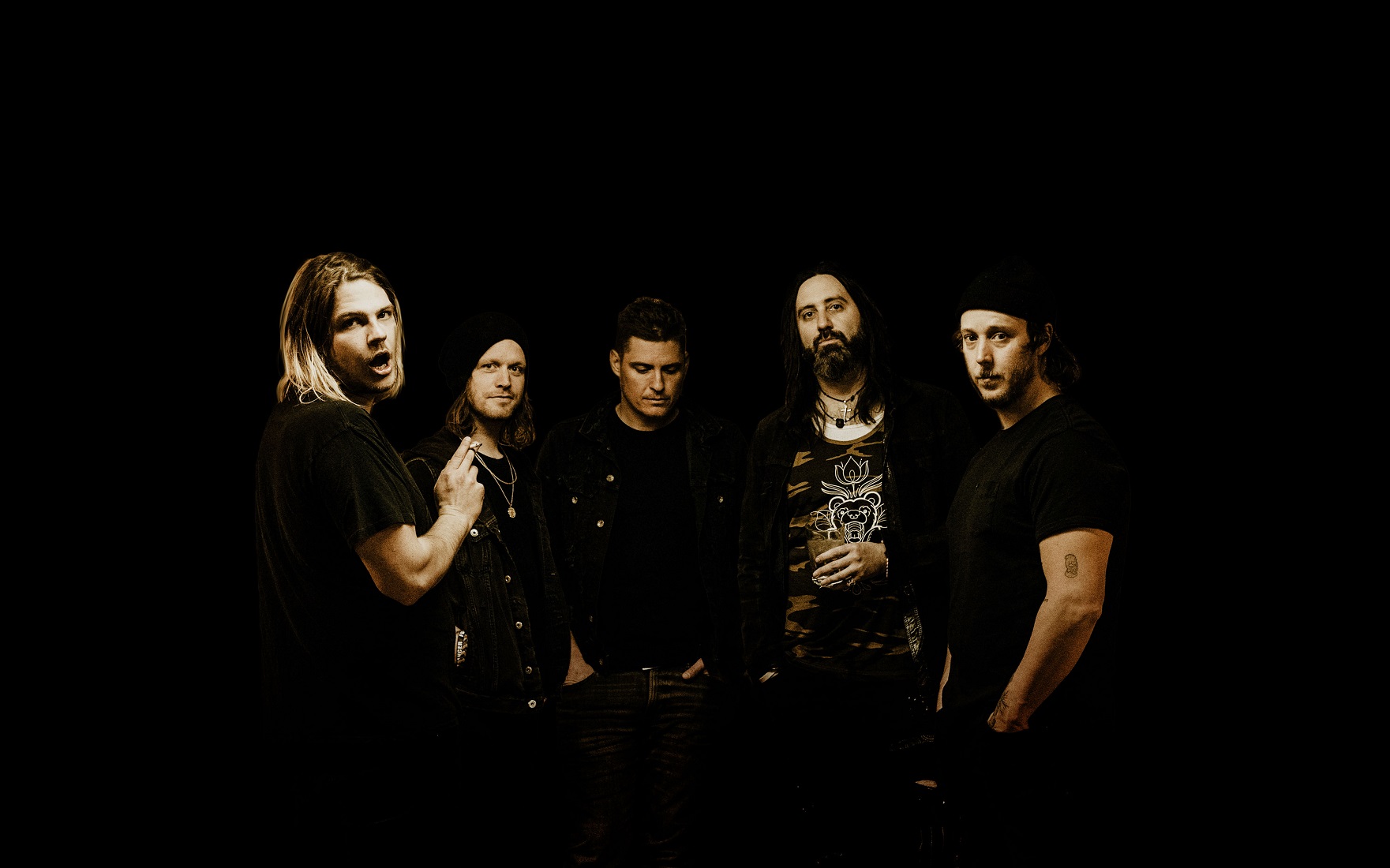 From their very start, The Glorious Sons have achieved the near impossible by sounding both familiar and unprecedented, offering a bold new idea of what it means to be a rock ‘n’ roll band in the modern era. Fronted by brothers Brett and Jay Emmons, the Kingston, ON-based quintet have resolutely manifested all of rock ‘n’ roll’s most positive principles – creativity and adventure, energy and expression, unbridled individuality and spirit of community. The past decade saw the band unleash three remarkable studio albums fueled by immense ambition and strikingly emotive songcraft, their stadium-sized hooks ringing out with an ardent, impassioned spirit that earned them two #1 Rock airplay smashes in the US and thirteen consecutive top 10 Rock radio hits in Canada.

“I truly believe that, to use the old cliché, rock ‘n’ roll will never die,” says lead singer-songwriter Brett Emmons. “It’s not just a sound anymore. It’s more of an attitude, a freedom of expression that people will always believe
in.”

Founded in 2011, the Glorious Sons immediately caused a commotion with their indelible brand of 21st century rock ‘n’ roll, born of classic elements but made fresh through the band’s spirited musical slant and raw-boned songwriting. The band proved as imaginative as they were motivated, recording and touring near non-stop in an effort to drive their music ever further. 2014’s debut album, The Union, earned them breakthrough success as well their first Juno Award nomination for “Rock Album of the Year,” fueled in part by such singles as “Heavy,” “Lightning,” and “The Contender,” the latter of which proved the band’s first ever #1 at Canadian Rock radio.

2017’s Young Beauties and Fools more than delivered on The Glorious Sons’ promise, this time taking home the Juno for “Rock Album of the Year” amidst worldwide airplay and increasing critical acclaim. The album includes the #1 singles, “Everything Is Alright” and “S.O.S. (Sawed Off Shotgun),” the latter proving the band’s US breakthrough, reaching #1 on Billboard’s “Mainstream Rock” chart.

Like any rock ‘n’ roll band worth its salt, The Glorious Sons spent most of their time on the road, lighting up sold out crowds on an ever-growing series of headline tours, support runs, and showstopping festival sets, even a pair of unforgettable stadium gigs supporting The Rolling Stones. The band has made sure to capture its robust live power for posterity by recording each and every performance, presented in an on-going series of in-concert archival releases that includes 2018’s Little Prison City: Live at Rogers K-Rock Centre and the following year’s An Unplugged Evening with the Glorious Sons: Live at Longboat Hall.

Hailed at their most mature work to date, 2019’s acclaimed third studio album, A War On Everything, showcased The Glorious Sons at their ingeniously inspired best by instilling a contemporary gleam on their traditionally naturalistic sound. Marked by its striking sonic diversity and searing emotional depth, the album earned the band a second straight Juno Award for “Rock Album of the Year” and second consecutive US #1 “Mainstream Rock” hit in “Panic Attack.”

With the wind at their back, The Glorious Sons kicked off 2020 ready to wrap up what had proven an extraordinary first decade with their biggest ever North American tour. The global pandemic changed all that of course but allowed the band a rare chance to finally step back and take a well-deserved breather. “To be honest, it was a bit of a blessing in disguise for us,” says Brett. “We’d been touring so heavily, we were really tired and worn down by that point. There was a little bit of a sigh of relief, in the sense that we probably wouldn’t have actually allowed ourselves to take a break without something happening beyond our control.”

“Our trajectory, at that point, we were headed to what we thought was the top of the mountain,” says Jay Emmons. “And now I don’t know if we’re stuck halfway up or if we rolled all the way back down.”

“Three or four months is okay,” Brett says, “but 12 months, that’s a lot of time to be purposeless. When you start a band, you expect to be playing in front of people. It’s about the connection and the kinetic energy that comes from it. To be off the road for this long, you’re missing a gigantic part of what it means to be a rock ‘n’ roll band. And that’s what we consider ourselves.”

The Glorious Sons worked to maintain that connection with a daily series of “Isolation Songs.” Stripped bare to the bone, the songs were marked by all the frustration and fear of that particular moment in time while still displaying an instinctive knack for artistic progression.

“It was like a challenge,” Brett says. “I was trying to write a new song every day. Instead of trying to perfect it and being precious with it and making plans for the future for it, it was just about releasing it to people and keeping myself occupied.”

That same spirit of spontaneity continued into a series of September sessions. After half a year apart, the members of The Glorious Sons – plus longtime engineer Steve Kirstein – gathered in Brett’s living room to record what he proudly calls “our rawest music to date.”

“What I wanted us to do was exactly what we did,” Brett says. “To get back to plug in and play. I thought we needed some rowdy, wild energy. It was a wild experience – seven guys and a lot of loud rock ‘n’ roll guitars.”

Shot through with earnest emotion and restless abandon, the recordings see The Glorious Sons moving forward with pulse-pounding verve and vitality, evincing all of the pent-up frustration of the past year while heralding what’s yet to come. Songs such as “Daylight” and “Young King” reverberate with the sheer joy of five musicians in full flight after being grounded too long, aglow with clear-eyed creative vision and all the direct fire of the band’s incendiary live set.

“There’s not as much care for organization with those songs,” Brett says. “They came out really free-flowing and wild. I know a lot of people probably have their minds made up about who we are after the last few years so I just can’t wait to hit them over the head with some of this psychotic, kinetic energy.”

By pandemic’s end, The Glorious Sons had built up a cache of more than 40 unreleased songs, evincing the band’s immeasurable drive and ever-growing desire to push themselves towards something original and all their own.

“Lyrically, they’re more explorative,” Brett says. “The voice on them is something that I didn’t ever tap into before. I don’t really know how to explain these lyrics. There’s more of a larger vision.”

The Glorious Sons will further expand upon that wider perspective by – finally! – getting back on the road. The band plan to work off some of the ring rust with a few small room local residencies before the appropriately named Unfinished Business Tour sees them making up postponed dates in the US and Canada in 2022.

“It’ll be a completely different batch of songs,” Jay says, “which is exciting.”

“We were looking at tour schedules,” Brett says, “and I got scared. Everything down to things like how is my wind going to be on stage after a full year off. You forget how much of a roll you’re on, how seasoned and in shape you are, you forget what the constant repetition and the routine does for you as a professional.”

As modern as tomorrow and yet wholly timeless, The Glorious Sons are determined to continue defying expectations and resisting easy pigeonholes.

“Now we’ve got to go out and show everyone that we’ve still got it,” Jay Emmons says. “We’ve got something to prove again.”

“It’s a constant journey and learning experience,” says Brett Emmons. “You’re always trying to change and improve yourself. One of my main things is to just keep our fans on their toes at all times. I don’t want them ever to know who we are, ever. That’s how you create a long career that’s relevant and stays fresh for decades. I mean, it can be the simplest thing that changes, but as long as you keep on challenging people and giving them something that they don’t expect. They might hate it at first. You might lose fans. But I believe that’s the way that you create a career that catches up with itself rather than just hits and then fizzles out. You don’t want to be a prisoner of any moment, ever. You want to continue and you want to lead.”