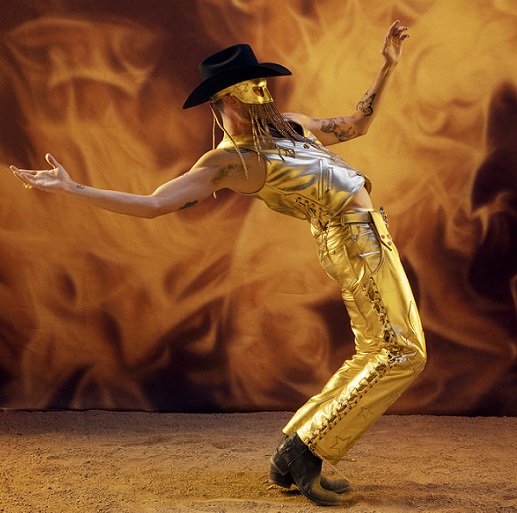 It was only after everything he thought mattered disappeared that Orville Peck truly broke free.

In a few short years, since the release of his debut album, Pony, Peck had emerged as both a vanguard and an icon: a new breed of country outlaw hell-bent on cracking open a restrictive and stale genre, a beloved leader for the queer community, a duet partner for both Miley Cyrus and Shania Twain, a touring dynamo and a thoughtful, personal lyricist. But as his rodeo came to a halt in March 2020, as it did for the rest of the world, Peck – who had been on the road so incessantly that he didn’t even have a home to call his own yet – saw loneliness, darkness and himself in ways he’d never quite experienced before. And through music, he transformed into the purest form of himself yet: a bronco that no cowboy but himself can tame. Thus was born his newest album, Bronco.

“I really experienced this feeling of breaking free and a wild sense of liberation,” Peck says. “I’ve always written from a personal place, but I’ve never connected so vulnerably before. I kept asking myself, ‘how can I go even deeper?’ And not hold back at all.”

Bronco, released to fans in three chapters, encompasses everything that makes Peck the singular artist that he is: always rooted in the traditional country he grew up with as a child, he explores into rock, psychedelic, bluegrass, Laurel Canyon and even the sounds of his hometown, Johannesburg, South Africa. Produced by Jay Joyce (Eric Church, Miranda Lambert) and recorded in Nashville, Peck began writing at his new home in Los Angeles after fighting through the quarantine darkness with acts of “radical self-acceptance.” He was supposed to be on his biggest tour yet, but the stages were quiet, so he spent his days waking up, having a cup of coffee and journaling until the lyrics came, ending up in his home studio for hours on end until Bronco started to take shape. Working with Joyce – his first time partnering with a producer for a record – was instant creative synergy. Like Peck, Joyce’s vision of country music is expansive, not restrictive, and they were able to push deep into new sonic landscapes.

“It was just the coolest experience,” Peck says, who brought his band to Nashville and recorded live to tape with little to no overdubs. “It felt like making a real album like how I grew up, in DIY bands, so full of life and passion. It was an incredible way to make a record, and I don’t think I can ever go back to recording the other way ever again.”

Released in three parts to free himself of the need for a single-dependent culture and let the fans lead, Bronco is an exploration into love of the self and of others: of recognizing and moving past the darkness, of knowing when to let others in and when to let yourself, and your own history, shine freely. Peck looks deep into depression and isolation on “Curse of the Blackened Eye,”; into the possibilities and letdowns of partnership on “Daytona Sand” and into his own heritage on the jubilant “Lafayette,” which incorporates South African Marabi sounds. “There’s a bluegrass folk song, the big strings and piano vocal ballads, there’s a Springsteen moment,” he says. “I just got inspired by all these different sounds and every song ended up feeling so unique.” Peck also explores the edges of his own voice on songs like “C’mon Baby, Cry,” where his vocal nuances and capabilities are on full, brilliant display.

Being inspired, and singing about, his birthplace of Johannesburg was new and welcome territory for Peck. A lover of a little mystery, Peck had left his origins a bit up to the imagination. But on Bronco, he takes back that narrative, too: on “Lafayette,” “Kalahari Down,” “Iris Rose,” and the gorgeous “City of Gold.”

“I was never really hiding where I was from, but I always felt like I didn’t want to say a specific place,” he explains. “But I suppose I finally felt like singing about where I’m from, because I have always been so proud to be South African. I was sitting around in Johannesburg as a little kid listening to Dolly Parton and Johnny Cash. That’s a country story, right there.”

Through thrilling sonic textures, from rich string sections to distinct country twang to moody seventies exotica, Peck created an album that tells stories not only in lyrics but in evocation – his songs are both cinematic and deeply personal, no emotion too small to be dismissed or set aside. And true to Peck’s style, the visuals for Bronco are meticulously curated: the album trailer includes cameos from Margaret Cho and Norman Reedus, and the campy video for Chapter One’s lead track, “C’mon Baby, Cry,” was directed by Austin Peters, who shot the video for Orville’s standout track “Queen of the Rodeo” and is Orville’s collaborator on all visuals for Bronco. His iconic style has led to numerous collaborations at the cutting edge of fashion, including working with Beyonce for her Ivy Park Rodeo collection, a Dior campaign and numerous magazine covers. He also was invited by the Mother Monster herself, Lady Gaga, to participate in her 10th Anniversary Born This Way album. He’s inspired thousands of tattoos along the way, a responsibility not lost on Peck. “There is a whole cross section of people who are fans of mine that I feel an absolute responsibility to be a beacon for,” he says. “None of that escapes me.”

A passionate live performer, Peck spent most of 2021 on the road with an extensive tour across the US and festival performances including but not limited to Lollapalooza and Governor’s Ball. He also supported Harry Styles at Madison Square Garden and performed on Miley Cyrus Presents: Stand by You PRIDE special for NBC’s Peacock alongside other country renegades like Mickey Guyton and Maren Morris. This April 14th, Peck will kick off a headline tour with stops in over thirty cities in addition to festival performances at Coachella and Stagecoach.

With the release of Bronco, Peck will begin a new era not only for his artistry and craft, but for country music itself – and for fans who are yearning for permission to be their honest, most unincumbered selves.

“This album is the truest expression of who I am,” Peck says, “untamed, wild, free.”